It was announced some time ago that a live action feature film of Sonic The Hedgehog was being made. Just this week, a motion poster was unveiled and some notes from the production team. Even though we only get a silhouette, stylistic changes to Sonic’s design are apparent, which has been met with negative reactions from fans due to many factors such as the changes to his shoes, the much more humanoid body and the lack of gloves.

Get your first look at Sonic The Hedgehog in his new live action movie.

A few other lowres images have been circulating the internet but have yet to be confirmed as final/official designs. However we do get a much better picture of Sonic’s face and how they handled his colouring in the poster below which is rumoured to be the pre-production pitch artwork. 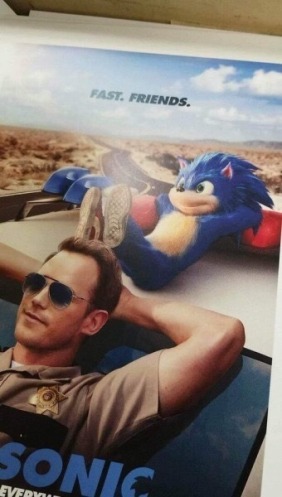 These three posters have spawned a lot of art, memes and discussion over the last few days. Fan reactions have not been good, so it will be interesting to see what future marketing has in store and if a “realistic Sonic” can ever win them over.